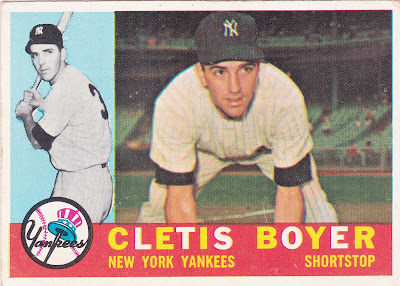 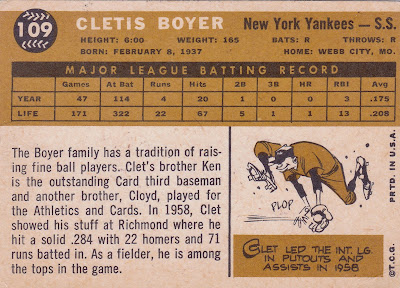 Career: Like a lot of Yankee players of this era he began his career with the A's. He spent 10 of his 16 big league seasons as a starter and won two World Series rings with the Yanks in five tries. He rarely hit over .250 for a season but was an outstanding fielding third baseman and won a Gold Glove with the Braves in 1969.

In 1960: This was his first season as a full time starting player, and he claimed a position that had been in flux for the Yankees. He hit .243 with 14 homers which was about what he averaged over his career as a full-time player.

Off The Charts: He's one of three Boyer brothers to play in the majors. Ken was a perennial All-Star with the Cardinals and faced Clete in the '64 Series. Cloyd had a modest career as a pitcher, mostly with the Cards in the early '50s. He was Clete's teammate with the 1955 A's.