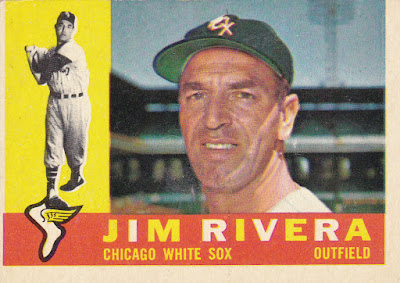 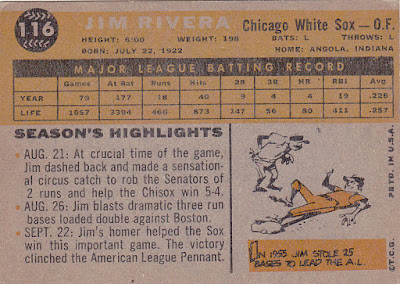 Career: The basics... Rivera was a speedy, slick-fielding outfielder for the Sox from 1952 thru 1961. His time with them was bracketed by partial seasons with the Browns and Athletics. He was a career .256 hitter with some pop to go with his fleet feet. But numbers don't tell Rivera's story. As I did when I posted his '59 Topps card on that set's blog, I am going to point you to an entry on the Baseball Fever board that details Rivera's (ahem) checkered history. A longer version can be found by hitting up his SABR bio.

In 1960: As noted in the SABR bio linked above, Rivera lost his starting job when the White Sox made a trade with Cleveland to bring back Minnie Minoso. Rivera played in only 48 games, mostly as a defensive replacement and pinch-runner. He only had 20 plate appearances in total. That's less than all but one of the Sox' full-time pitching staff.

Off The Charts: He wrapped up his career with time as a manager in Puerto Rico, as a minor league player-coach in the AA and PCL, and as a player in the Mexican Leagues. He lived to be 96.

The Card: Yes, my copy of this card is mis-cut, just as it looks in the scan above.  And, yes, I am posting a bit out of my usual numerical sequence. I hadn't intended to with this one but sometimes you just push the wrong button, yes?
Posted by Commishbob at 10:38 AM