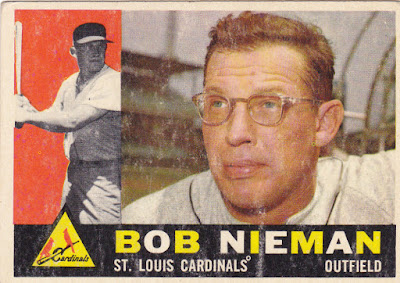 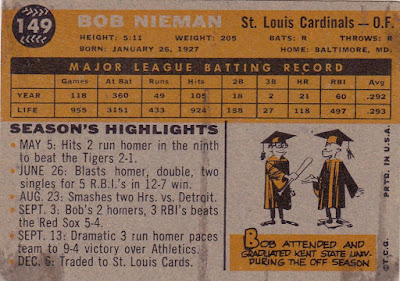 Career: Bob Nieman's bat, not his glove, kept him in the majors for 12 years for six different teams. He started his career with the Browns after originally being signed by the Reds. He spent more time with the Orioles than any of his other clubs and twice hit over .320 for them. Nieman had a .295 career average and was seventh in the AL MVP voting in 1956.

Nieman's only post-season experience was also his big league swansong. His final at-bat was a pinch-hitting appearance for the Giants in Game Four of the 1962 World Series. He hit for Ed Bailey and drew a walk. He was replaced by a pinch-runner and called it a career that winter.

In 1960: As shown on the card he was back in St. Louis, this time with the Cardinals. His career was winding down, and he was a platoon outfielder playing in 81 games, mostly against right-handed pitching. The Cards had struggled against lefties the year prior so they made a trade with the Orioles for him. He got quite the endorsement from former teammate Marty Marion: “He’s only a mediocre outfielder and he’s a hypochondriac, but, man, he can whale that ball.” Nieman supplied a solid bat that year, hitting .285.


Off The Charts: Nieman is one of two players in MLB history to homer in each of his first two big-league at-bats. Keith McDonald, in 2000, is the other. He did it for the Browns in September 1951 at Fenway Park. He hit both dingers off Mickey McDermott.
Posted by Commishbob at 7:30 AM