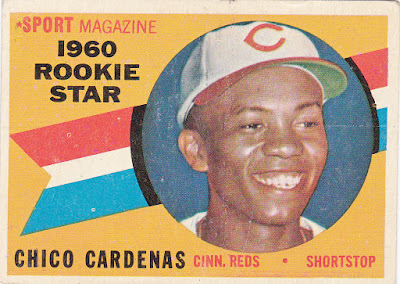 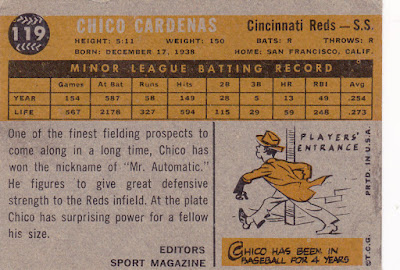 Career: The Cuban native played from 1960 to 1968 with the Reds and made four All-Star squads. Moving to Minnesota he was a member of the Twins West Division champs there in '69 and '70 and again was an All-Star. His last season as a regular was 1972 with the Angels but he played for the Indians and Rangers through 1975 as a part-timer. Known as a good fielder, he won the NL Gold Glove at shortstop in 1966. He had some power for a smallish middle-infielder as he showed with several double-digit homer seasons. His high was 20 in '66.

In 1960: Cardenas was called up and debuted on July 25. He had a couple of hits, an RBI and scored a run in that one. The Reds' shortstop job was his to lose at that point. He had multi-hit games in three of his first five starts. He cooled off and by September Roy McMillan had reclaimed the spot.  Cardenas finished with a .232 average.

Off The Charts: Cardenas, from a family of 15 kids, came from Cuba on the eve of the revolution that cut off the flow of players from that island. He fudged his age by a year at least when he signed with the Reds. The minimum age for a big-league contract was 17, Chico was 16 at best according to multiple sources. In 1959, while playing in Havana with the Reds' AAA club, he was inadvertently shot by fans who were firing off guns in celebration of a revolution anniversary. His given name is Leo, btw.

The Card: Cardenas looks every bit of 16 in that photo. The bio makes note of his power/size ratio.