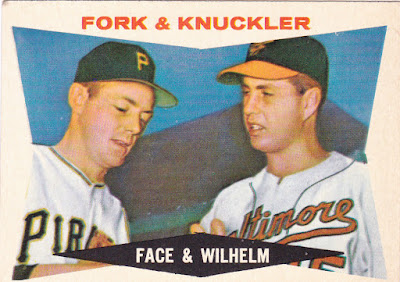 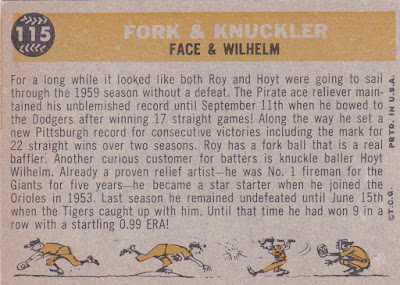 Two of the era's top relief pitchers posed for this card. Each had a highly specialized repertoire on the mound. Elroy Face is arguably the best-known forkball pitcher of all time. The pitch was (allegedly) invented by 'Bullet' Joe Bush in the 1930s. Face truly mastered the thing and used it to get himself named to five NL All-Star squads.

Hoyt Wilhelm had a remarkably long and productive career. He debuted with the 1951 Giants and over 21 seasons he won 143 games as both a starter and reliever for nine different clubs. His knuckleball inspired Paul Richards, his manager in Baltimore, to construct an oversized catchers' mitt in an effort to reduce the number of passed balls his catchers accumulated. Wilhelm is a Hall of Famer.

More than likely this photo was taken at one of the two All-Star games in 1959. Both were held at NL parks so we can't point to the home uni on Face or Wilhelm's Orioles roadie as a clue. I'd like to think it was the first of the two, the July game at Forbes Field.
Posted by Commishbob at 6:00 AM