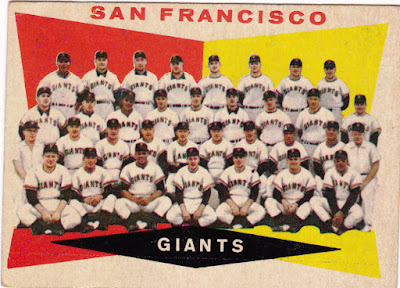 The Giants finished just over .500 and in the middle of the pack in 1960. By all accounts, their first year in the new Candlestick Park was supposed to be a better one. Bill Rigney (see below) got them off to a good start but when they began sliding further behind the Pirates in June, Rigney was fired. He was replaced by Tom Sheehan, a scout. He couldn't do anything to turn the Giants' season around and they canned him at seasons end as well.

Willie Mays and Orlando Cepeda led the way at the plate. It was a group that finished about fourth in most categories in the NL. The pitching staff ranked near the top of the NL but couldn't overcome the team's batting woes. Mike McCormack and Sam Jones led the staff which also included rookie Juan Marichal as their fifth starter. 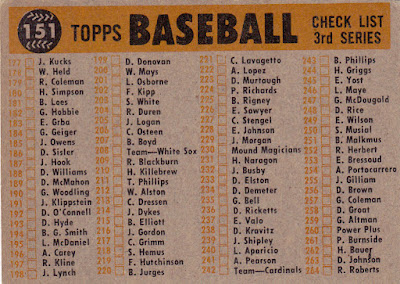 If you asked Alexa to 'Show me a baseball lifer' she'd probably come up with a shot of Bill Rigney. 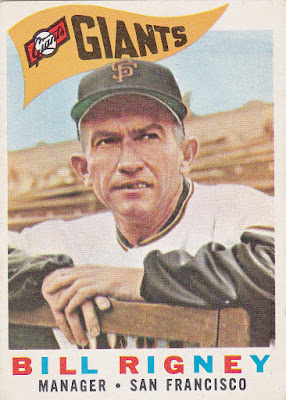 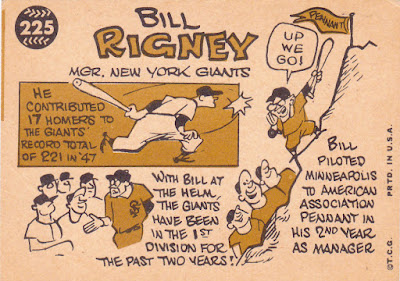 I posted this Bill Rigney card on my Five Tool blog a few years back when I was featuring these managers cards:

Rigney played all around the infield for the New York Giants from 1946 to 1953, four of those years as a regular. He made the '48 All-Star game and drew a walk after subbing in for Red Schoendienst. He began managing with the Giants in New York in 1956 and was a fixture in dugouts in both leagues right through 1976 when he returned after four years as an exec to manage the Giants a second time.

In addition to his six seasons with the Giants he managed the Angels for nine and the Twins for three. His 1970 Twins team won the AL West title but fell to the Orioles in the playoffs. After managing he served in the front office of the A's and was a broadcaster.

Of the three coaches shown on the Giants' coaches card, Wes Westrum is the best known. He caught for the Giants for almost a decade and managed the Mets in the mid-60s. It was Westrum who took over for Casey Stengel when the original Mets manager broke his hip in 1965 and eventually retired. He returned to the Giants in the 70s and managed them for a couple of seasons.

Salty Parker was a long-time major league coach who had played very briefly for the Tigers in 1936. Ironically it was Parker who replaced Westrum for the last few weeks of the 1967 season when Wes was let go by the Mets. I remember Parker best as a coach in Houston from 1968-1972.

Bill Posedel was a Dodgers pitcher prior to WWII once winning 15 games.  He gave four years to the service during the war and came back to be a coach and scout. 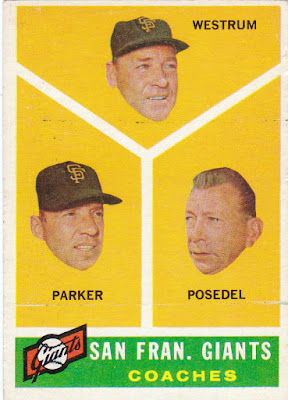 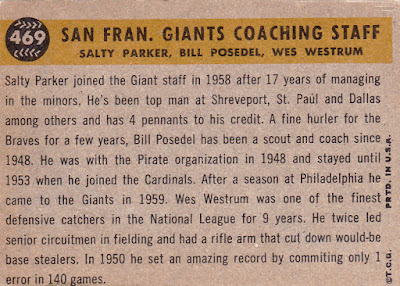