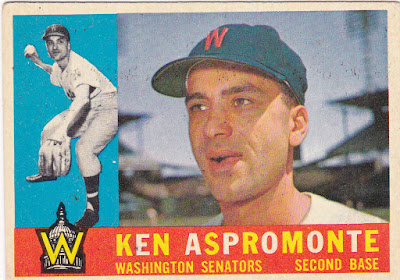 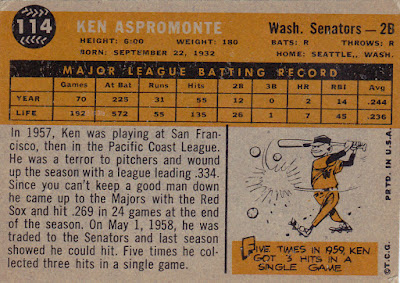 Career: Aspromonte spent eight years banging around with six different clubs. He spent most of his career as a utility infielder and had experience at all four spots. Only in 1960 did he play in an everyday role. He briefly returned to the minors and then went to play in Japan when his days in MLB were over. He played three seasons there.

He managed the Indians from 1972 thru 1974 with his clubs finishing fifth, sixth, and fourth.

In 1960: He had his best season with a slash of 10/48/.288. All were easily his best totals. But the bulk of it didn't come in a Senators' uni. In May Washington (these were the original Senators) traded Aspromonte to the Indians. In December the 'new' Senators (the expansion version) drafted him from the Indians and that same day traded him to the Angels. Bottom line...he was with two separate Washington Senator franchises in one calendar year.

Off The Charts: Only in three of his eight big league seasons did he end the year in the same uni he started it in.

His brother Bob played 13 years in the NL, primarily with the Colts/Astros, and is a member of the Astros Hall of Fame.