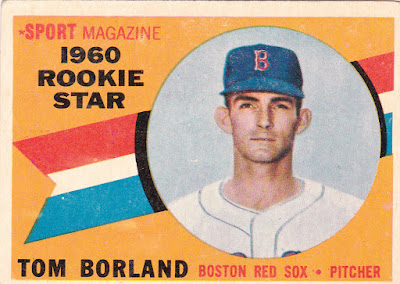 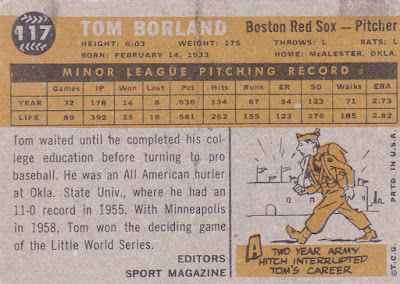 Note: I'm breaking my posting pattern to spread out the Sport Magazine Rookie Star cards. I'll say this here and won't repeat it endlessly...this subset holds a special place in the hobby for me. I remember that when I first pulled some from 1960 packs I thought these guys were true immortals! Each destined to be a superstar. Of course, that didn't happen but the design remains, along with the 1958T All-Stars, at the top of my list of great card designs. I loved these then and still do.

Career: After pitching at Oklahoma A&M (now Oklahoma State University) Borland had a couple of impressive minor league seasons in the Boston chain. He debuted with the Sox in 1960 and pitched in 27 games over two seasons. He finished with an 0-4 record. He finished his pro career pitching not far from home for Oklahoma City in the Colt 45s system.

In 1960: He made all but one of his big-league appearances this season between mid-April and August. Borland made four starts and had three saves out of the bullpen and compiled an ERA of  6.53 over 51 innings. He also pitched in five games at the AA level for Boston.

Off The Charts: OSU's athletic site paid tribute to Borland after he passed in 2013 with this...

"[Borland}was inducted into the Cowboy Baseball Hall of Fame in 1998. He helped lead the Aggies to back-to-back College World Series appearances in 1954 and 1955 and was named the CWS Most Valuable Player in 1955."