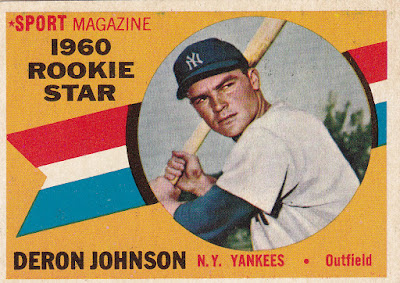 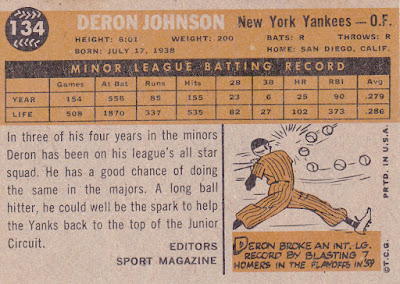 Career: I think of a lot of different teams when I remember Deron Johnson, the Yankees are NOT one of them. But here he is. Johnson signed with the Bombers in 1956 out of high school and in five minor league seasons put up these home runs totals: 24, 26, 27, 25, 27. That's steady.

He got a peek at the majors at the end of 1960 and opened 1961 with the Yanks but, despite being tabbed as 'The Next Mickey Mantle' by some, he struggled and in June was dealt to the Athletics. He didn't hit much for them either as he had his playing time interrupted by stints in the military. The A's sold him to the Reds and thus began a trip that took him to eight different franchises over sixteen years.

He was truly a 'corner' guy as he played left, right, first and third before becoming a DH late in his career. He had 245 career homers and won a Series ring with the '73 Athletics. His best year was 1965 with the Reds when he led the NL with 130 RBIs and finished fourth in the MVP race.

In 1960: As mentioned, he got a brief look by the Yanks in September and got into six games. He had a couple of hits in four trips. The bulk of his year was spent at AAA Richmond. It was his third full season there. Breaking through to the Yankees roster in those days wasn't easy.

Off The Charts: Johnson was a baseball and football star in high school in San Diego. His SABR bio states:

Johnson played end, linebacker, kicker, and punter for San Diego High School. [...] Pursued by several colleges, Johnson was offered numerous football scholarships, including one from Notre Dame, but Johnson turned down the Fighting Irish and the other schools. Upon graduation from high school in 1956, having been also sought by the Yankees, Braves, Red Sox, Indians, and Pirates, Johnson signed with New York Yankees scout Gordon “Deacon” Jones to a Class-D contract for $1,000 a month.


The Card: We've seen this before...Topps using the same photo for multiple cards of the era. Johnson had designated  'rookie' cards in 1959 and 1961. 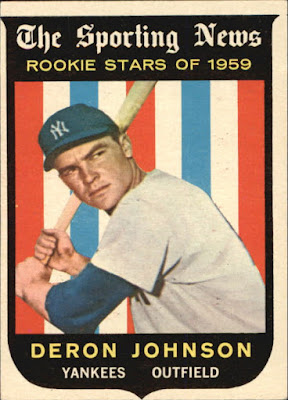 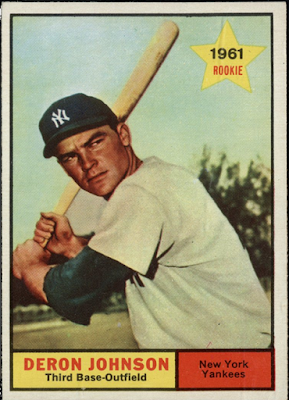 I thought I'd found the original photo that was the basis for these but there are some subtle differences, more of his uniform number visible, etc.,. I'm thinking the picture is from the same photo session but not exactly the same shot. Opinions welcome. 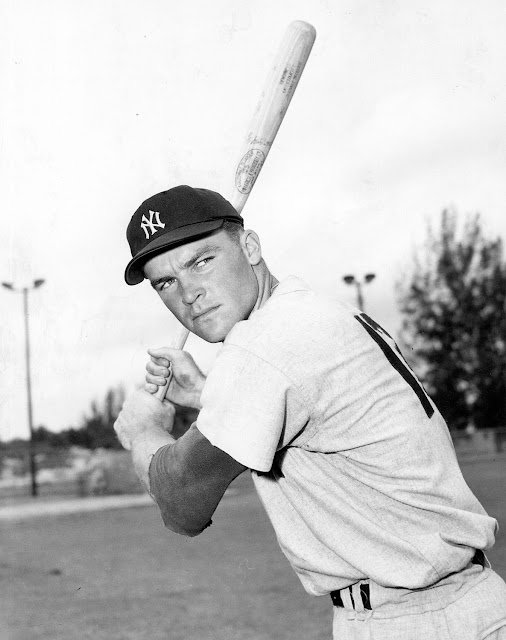