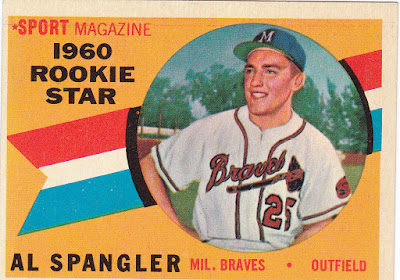 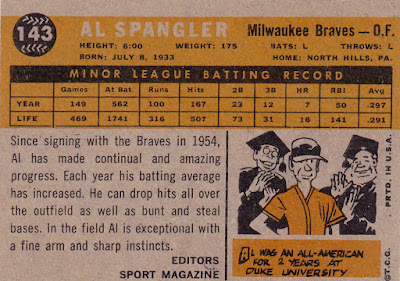 Career: After four minor league seasons and two years in the service, Al Spangler made the Braves in 1960 and spent a few years as a spare outfielder. His career got a boost with NL expansion and being drafted by the Colt .45s. His time in Houston, from 1962 through June 1965, was his only spell as an everyday player.

He spent the rest of '65 with the Angels, was farmed out for much of '66, and was released. He signed with the Cubs and played in Chicago until 1971 with a few more minor league stretches thrown in. Spangler had little power, hitting just 21 career homers in almost a thousand games, but he maintained a decent average, was fast, and was a good defensive player.

In 1960: He saw duty in over 100 games but managed only 122 at-bats. Much of his play came as a pinch-hitter, pinch-runner or defensive late-inning guy. He hit .267 but went without a homer and had six RBIs.

Off The Charts: Spangler was a graduate of Duke University where he was a baseball All-American (as the cartoon notes). He completed a degree in mathematics. After a year or two as a coach with the Cubs' organization in the 70s, Spangler became a coach and AD at Hargraves (Huffman, Tx) High School, not far up the road from me.