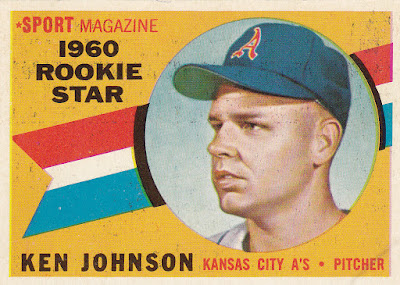 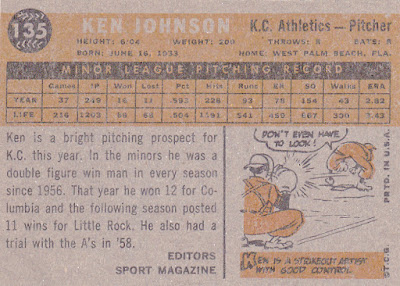 Career: Ken Johnson's pro career stretched over 18 years. He was a Philadelphia A's signee and pitched in their system for a couple of seasons before spending a year in the service in 1954. He returned to baseball and continued in the minors for most of the decade. He made the majors for good the year this card was issued and stuck around for a decade pitching for multiple clubs. Johnson's best seasons came with Houston and Milwaukee/Atlanta from 1963 through 1967. He won 65 games over that stretch. His last appearances came in 1970 with the Expos.

Johnson had a quick, two-out appearance for the Reds in the last game of the '61 World Series when they lost to the Yankees. It was his only postseason experience.

In 1960: He'd had a few looks previously but this was his first full year. He pitched in 42 games (his highest total ever), all but six out of the bullpen. He went 5-10 but his stats suggest he was better than that mark. His 4.26 ERA was actually the highest he had in any full season.

Off The Charts: Johnson is the only pitcher to have lost a nine-inning no-hitter. It came in April of 1964. In addition to a standard player bio, Johnson's tough luck loss get's a SABR write-up worth reading.

Also from SABR... "Johnson was actually born left-handed but his father, out of habit, put Ken’s baseball glove on his left hand and taught him to throw right-handed. Johnson eats and writes as a lefty but pitched professional baseball right-handed for 19 seasons."

The Card: Yes, it's just as washed out as it appears in the scan.
Posted by Commishbob at 7:00 AM