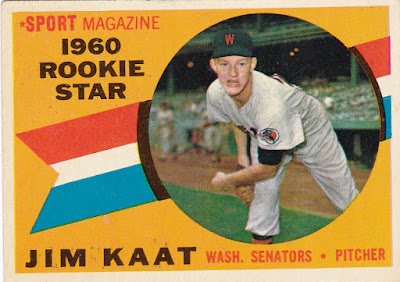 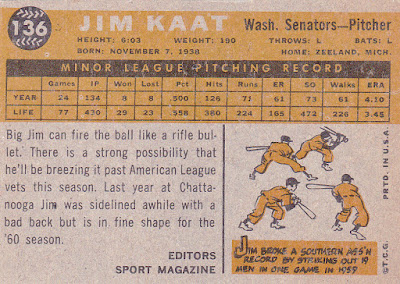 Career: Contrary to popular belief, Jim Kaat did NOT pitch to Babe Ruth AND Mike Trout. It only feels like that. He actually began his pro career in 1957 after playing for Hope College. He spent a few seasons in the Senator's system before getting a quick look in 1959, making the team (for a while) in 1960, and breaking through with the Twins in 1961. Over the span of four decades* Kaat won 283 games, won 16 Gold Gloves, made three All-Star squads, and was elected to Baseball's Hall of Fame in 2015 by one of the Vet committees. As was pointed out in the comments...he is not a HoFamer. I must have been dreaming that.

He made three starts for the Twins in the 1965 Series, winning one and losing two. He did get a WS ring, though. He claimed it in 1982 with the Cardinals when he was working out of their pen, a year from retirement.

Following his active playing days, he was a color commentator for numerous organizations including the Yankees (WPIX, YES/MSG), NBC, CBS, ESPN, and the MLB Network.

In 1960: Kaat began the season in the Nats' rotation and had a good start in April including his first career win with a 7-inning, three-hit performance at Yankee Stadium on the 27th. Then things went bad for the rookie, and he lost five of his next seven starts. He was sent to the bullpen and then to AAA where he wasn't very impressive but was good enough to get a September recall to the majors.

Off The Charts: OK, this is nuts. If you're a golfer you understand the significance of 'shooting your age'. It's a feat that only players who maintain their skills into their retirement years accomplish. Kaat has reached that links milestone...left-handed AND right-handed. Color me impressed.


*=I played intramural softball in four decades at the University of Houston. I'm in the UH IM Hall of Fame. Other than that I have nothing in common with Jim Kaat.
Posted by Commishbob at 7:00 AM