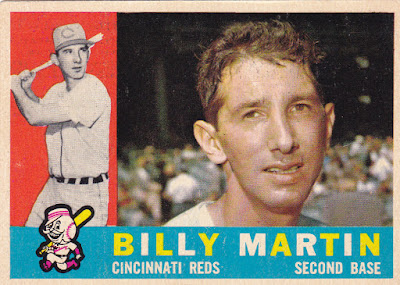 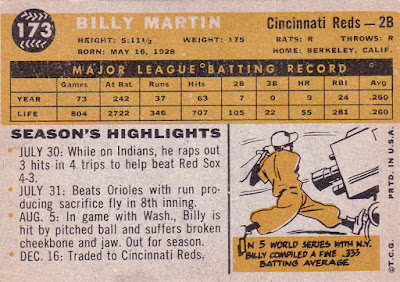 Career: Billy Martin had a reputation as a battler that he carried with him through both his playing and managerial careers. He was also part of Mick's Clique when he played in NYC with the Yankees. He played for 11 seasons, the first seven with the Yankees beginning in 1950 after a single minor league season. Martin hit .257 with a touch of power. He hit 15 dingers in 1953 and 65 in his career.

Over his final five years, he played for seven different teams which has to be close to a record. His ninth-inning single in Game Six of the 1953 Series won the title for the Yankees. Martin won four titles as a player and added one as Yankees manager in 1977.

In all he managed 16 years for the Twins, A's, Tigers and, famously, the Yankees. His relationship with George Steinbrenner (and numerous hirings/firings) is well known. His SABR bio will keep you entertained for days.

In 1960: This was his next to last season and his only one with the Reds. He played just over 100 games at second, hit .246 and had his contract sold to the Braves at seasons end.

Off The Charts:
SABR on his playing skills:  [Casey Stengel was]  asked why he thought so highly of Martin as a player, Stengel replied, “If liking a kid who never let you down in the clutch is favoritism, then I plead guilty.”

SABR on his managerial skills: Martin commanded respect as a manager. In 1987, in a poll of 600 former players, he ranked eighth among some heavyweights – behind Stengel, Joe McCarthy, Walter Alston, John McGraw, Connie Mack, Earl Weaver, and Al Lopez, and ahead of Whitey Herzog, Sparky Anderson, and Tommy Lasorda.

SABR on his eulogy, etc: At Martin’s viewing in a New York City funeral home, thousands filed in to pay their last respects. The funeral took place at St. Patrick’s Cathedral and Cardinal John O’Connor delivered the eulogy. More than 500 attended, including former President Richard Nixon, numerous baseball executives, and many players and ex-players.

This video, less than five minutes long, consists of comments from players he played with and managed recorded in the wake of Martin's Christmas Day 1989 death in a car accident at the age of 61,