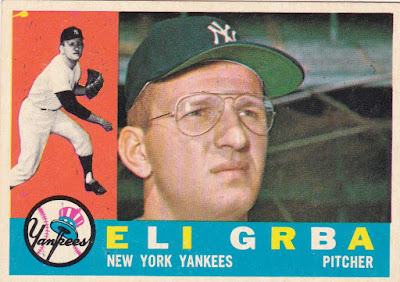 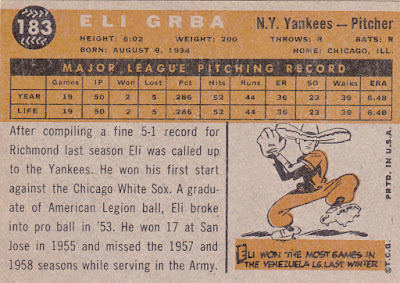 Career: Grba was originally a Red Sox signee and he pitched for four years in their system before Uncle Sam called and he spent two years in the Army. When he returned in 1959 he was promptly traded to the Yankees and he was called up to debut in June. He had a bumpy ride and was back in the minors to start 1960.

The Angels drafted him as their first-ever player for 1961. He spent a couple of years in their rotation and finished his career with a year in the Mexican League and the minors. His career, and life immediately afterward, was marked by alcoholism which he beat later in life. He was able to get back into baseball as a scout in the 1980s.

In 1960: He got off to a terrific start in AAA at Richmond (7-1 2.83) and was called up to the Yanks in June. He went 6-4 in 25 games including nine starts. He appeared in the World Series as a pinch-runner when Elston Howard was hit in the hand by a pitch in the second inning of Game Six. He didn't get to pitch in the Series.

Off The Charts: Grba was the first player taken by the Angels in the AL expansion draft in December 1960. He was selected on the recommendation of his former Yankee manager Casey Stengel who had turned down a managerial offer from the team but was serving as an informal advisor.

The Card: It's been mentioned here and elsewhere...some of the photos used for the set were weirdly cropped with the subject crowded off to one side of the photo on the card. This is one of those. But other than that the red/blue/yellow/white combo is a nice one.