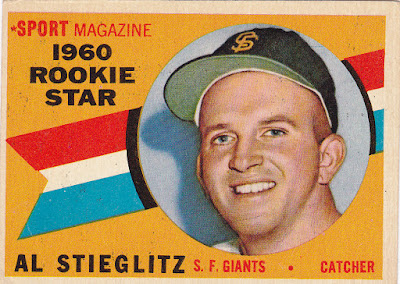 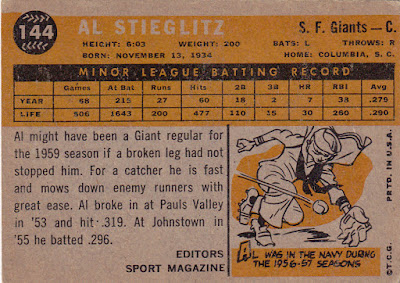 Career: Stieglitz spent six years in the minors after the Giants signed him in 1953. He made it as far as AAA for one injury-shortened season (a broken leg in 1959) and never appeared in a big-league game. He was a .283 hitter for his career in the minors and had some power. But he wasn't able to make enough progress to stick with the Giants. As the card notes, he spent two years in the Navy in the middle of his baseball career. Baseball-Reference has him listed as a Georgia Bulldog but their latest media guide doesn't show him as a letterman.

In 1960: This was the end of the trail for Al. He came back from his broken leg to find himself in AA ball. After hitting .243 in 98 games in the Texas League, he hung up his shin guards.

Off The Charts: I'd like to report that Al Stieglitz married a starlet, was elected to Congress, or even shot a man in Reno (just to watch him die). Best I could come up with, after an eight-page dip into Google, was a reference from a card-related book that he once had a beer with Willie McCovey, Hobie Landruth, and Sy Berger of Topps. So there's that.