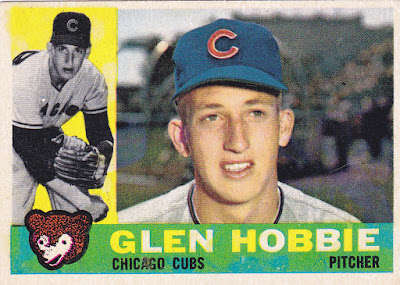 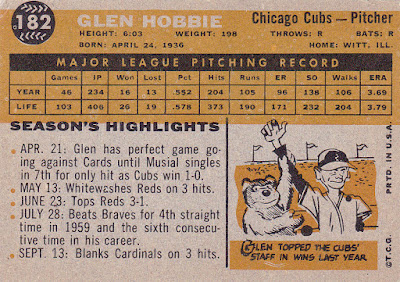 In late August he hooked up with Vinegar Bend Mizell of the Pirates in a pitching duel that was 1-1 at Wrigley in the bottom of the ninth. With two outs, Hobbie was allowed to bat(!) by skipper Lou Boudreau. Hobbie proceeded to launch his first (of four) career homers into the left-field stands to win his own game.

Off The Charts: In April 1959 Hobbie pitched a one-hit shutout over the Cardinals. He had a no-hitter until Stan Musial roped a single in the 7th inning. His post-game quote: “The first thing I said to myself when Stan got the hit was, ‘I’m glad he didn’t hit a lollipop; he hit my best pitch.’ ”

After retiring from baseball, Hobbie worked as a supervisor for the Roller Derby Association. I kid you not.
Posted by Commishbob at 7:00 AM