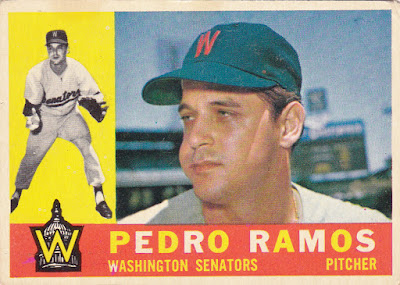 Career: Ramos was known as the 'Cuban Cowboy' for his habit of wearing a 10-gallon hat and boots. (During his time with the Yankees my father called him 'Pistol Pete' for some reason…ironic given Ramos' later life). He had a long, much-traveled career which was largely spent with the Senators/Twins and Indians as a starting pitcher in the late 50s/early 60s. He led the league in losses for four consecutive seasons which was probably a product of his being durable and playing with the AL's cellar-dwellers.

An All-Star selection in 1959, he was also a pretty solid hitter with 15 career homers and a .155 lifetime average.

Ramos became a huge hit in New York late in 1964 when he was nabbed by the Yankees in a trade with the Indians. He appeared in relief (he'd become a bullpen guy by then) in 13 games and racked up 8 saves with 21 K's and no walks in 21 innings. But he wasn't eligible for the World Series because the trade had been made after the deadline.

In 1960: He was 11-18 while leading the league in starts and batters faced. His stats reflect a much better year than his W-L. This was also the year he was involved in baseball only All Cuban Triple Play. SABR tells the tale better than I:

[A pitch to] Whitey Herzog resulted in a delectable tidbit of 1960s trivia — an all-Cuban triple play. The setting was Washington’s Griffith Stadium, the teams involved were the hometown Senators and the visiting Kansas City Athletics, and the date was July 23, 1960. In the top of the third inning, with Washington holding a 3-1 lead and Kansas City threatening to cut the gap, outfielder Herzog stood at the plate with a full count, Jerry Lumpe rested on first, and Bill Tuttle was the baserunner at second. Herzog lined the next pitch straight into the glove of pitcher Ramos (one out); Ramos whirled and heaved to first baseman Julio Becquer (doubling up Lumpe for out number two); Becquer then tossed down to second where shortstop José Valdivielso tripled up the slow-footed Tuttle. Presto, a big-league feat never before or since duplicated, an all-Cuban triple play.


Off The Charts: He's one of the players whose 'off the Charts" section could easily run long enough for a book. His SABR bio paints a picture of a 'colorful' but troubled soul. He was convicted on gun and drug violations on more than one occasion during his post-career days. He was finally sent to prison after his third strike (pun sort of intended).

Here's a sample from his bio:


The fateful pitch to Mickey Mantle resulted in one of the most memorable blasts among the considerable list of Mantle tape-measure shots. The setting was the first game of a May 30, 1956, Yankee Stadium twin bill in which Mantle faced and terrorized two of his favorite victims, Ramos (12 career homers) and Camilo Pascual (11 lifetime blasts).1 Struck by an errant Ramos fastball in his first trip, Mantle stepped up a second time with the Yankees on the short end of a 1-0 score. He quickly knotted the count with a shot that came within approximately 18 inches of being the first ball ever to exit the cavernous ballpark on the fly.


I also enjoyed this tidbit from a site called the Cuba News:


Ted Williams makes a swing at the ball, but cannot find it. It is the third strike and while the best batter in history walks to the dig-out, the man who just dominated him, Pedro Ramos, amidst the excitement, asks the batboy to tell Ted to sign the ball for him.
The fearsome Boston slugger, was pleased, but won’t forget the insult. The night is young and a couple of innings later he takes revenge with a homerun by a mile
As he does a lap of the square, after passing third base, he shouts to the pitcher: “hey, Pedro, find that, I’ll sign it too.”