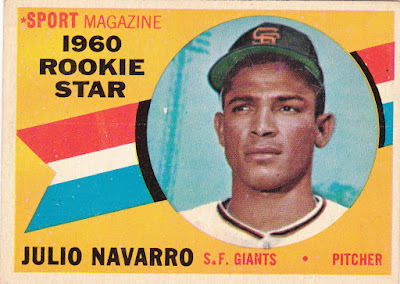 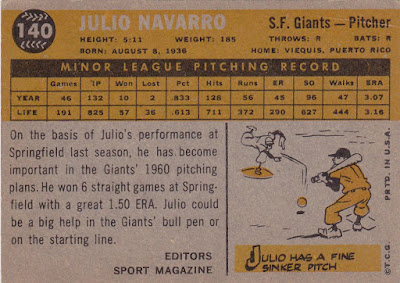 Career: The New York Giants signed Julio Navarro out of Puerto Rico in 1955. He pitched exceptionally well in their system waiting for a shot that didn't come. The Giants dealt him to the Angels on September 2, 1962 and the very next day he was on the mound in a game at Yankee Stadium. He pitched three innings in a win for the Angels and was back out there the net day to record his first win with another relief appearance.

He had a 12 save season in 1963, his best overall campaign. He was traded to Detroit in April of '64 but never put together another good season. He returned to the minors and was a starter in the Braves system for a number of years and made a final big league cameo in 1970.

In 1960:  Navarro spent the season in AAA with teams affiliated with both the Giants and the Orioles. I have no idea how that stuff worked. He went 5-12. Most of his 1960 stats for that year (and the next) are not recorded on Baseball-Reference.

Off The Charts: He's the father of Jaime Navarro who had a 12-year career as a starting pitcher with the Brewers, Cubs, White Sox, and, for a few games, Indians. Jaime won 116 big league games, 109 more than his Pops. The Navarros were the first father and son to each record a major league save.