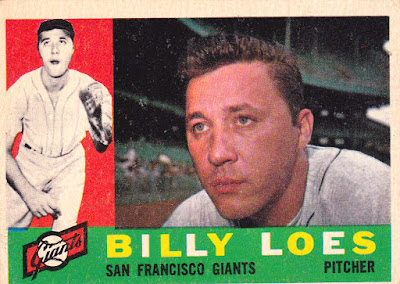 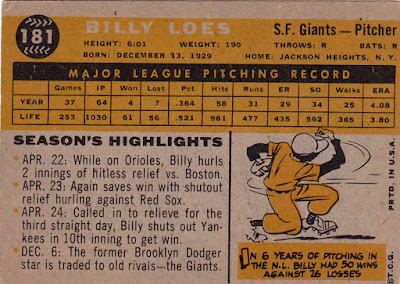 Career: Loes was signed by the Dodgers in 1949 as a local kid from Long Island. He spent only one season in the minors before serving in the military and then jumping into a regular role with the powerhouse Dodgers of the era. Loes won double-digit games in each of his four seasons and had 50 wins for Brooklyn. He pitched in three World Series.

After one disastrous start in 1956 he was sold to the Orioles. In 1957 he had his best season since his rookie year and made his only All-Star team (three scoreless innings, btw). He finished up his career with the Giants and retired after the 1961 season.

In 1960: He made 31 relief appearances for the Giants and nailed down six saves and a 3-2 record. But while he pitched only 45 innings, the lowest of his career, he pitched well enough to earn a spot as a starter in '61.

Off The Charts: Loes is best described as 'eccentric' but to fully appreciate him you need to read his SABR bio. He was a strange guy, no doubt. A sample: On the eve of the 1952 World Series, Loes found himself in a mini-controversy when reporters asked him to clarify his prediction that the New York Yankees would beat his Dodgers in six games. Claiming that he was misquoted, Loes responded, “I never told that guy the Yanks would win it in six. I said they’d win it in seven.”

The Card: There is nothing attractive about this card. Not even the nifty Yankee Stadium locale can save it.
Posted by Commishbob at 7:00 AM