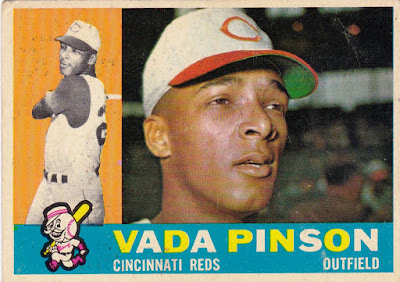 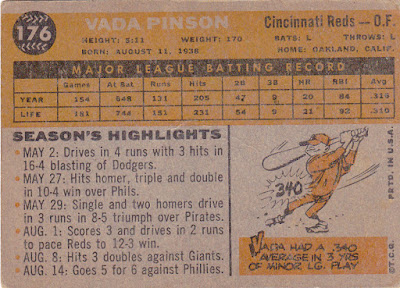 Career: When I hear someone reference 'The Hall of the Very Good' (guys who are just a notch or so below HoF worthy) I think of Vada Pinson, Speed, power, defensive ability...he really was good at everything. Consider that he led the NL in hits, doubles, and triples twice each, and led the league in runs scored once. He was Top Five in stolen bases seven times. Pinson won a Gold Glove at a position played by Willie Mays. He was durable, too. He led the NL in at-bats twice. Pinson finished his 18-year career with more than 250 homers, more than 300 steals, and a .286 average.

He spent 11 years with the Reds and then a couple each with the Indians, Royals, Angels and a solo campaign with the Cardinals. And right up to his final season he was a solid player. After his playing days, he coached for several clubs through 1994. He passed away after a stroke in 1995 at the age of 57.

In 1960: His numbers fell off just a bit from his terrific sophomore year of 1959. But even so, he led the league in doubles, hit .287, one point off his career mark, and made the All Star team for the second time.

Off The Charts: Hey, what's SABR got to say?


Apparently, Pinson was so talented musically that he seriously considered making the trumpet his career choice. However, the legendary coach at McClymonds, George Powles, who had been instrumental in developing Pinson's future major league teammates Frank Robinson and Curt Flood as well as basketball superstar Bill Russell, recognized Pinson's raw athletic ability. Powles helped the youngster to understand and realize his potential as a professional baseball player. 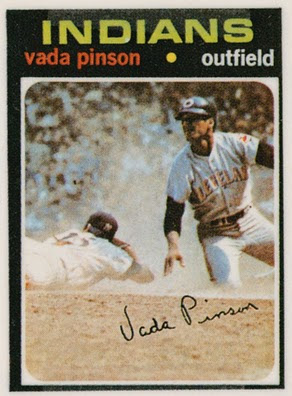 His 1971 card uses a shot taken on a day I was at Yankee Stadium in June 1970. It was an amazing day of baseball that I've referenced several times on my other blogs. If you care to take a look at the story on my Five Tool Collector site.
Posted by Commishbob at 7:00 AM