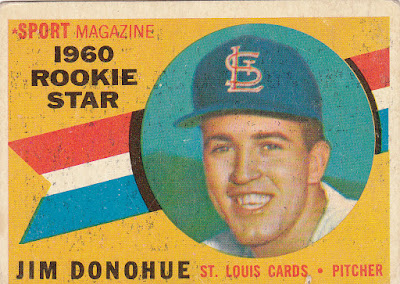 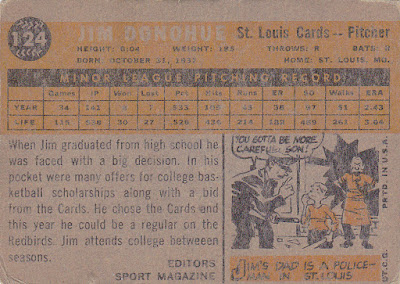 Career: Donohue pitched in 70 games over the course of two major league seasons for three different teams, none of which were the St. Louis Cardinals. After four and a half seasons in the Cards' chain, he was traded to the Dodgers in 1960 and was subsequently taken in the Rule 5 draft by the Tigers, traded to the Angels and then on to the Twins. All within 23 months. He made nine starts over those two seasons and put up a 4.29 ERA with a 6-8 record.

In 1960: Traded mid-year from the Cards to the Dodgers, Donohue went from the Rochester Red Wings to the St. Paul Saints. Both the Cardinals and Dodgers had huge, loaded farm systems. 33 players with Rochester in 1960 had, or would have big-league experience. 18 players with St. Paul fell into the same category. Donohue went 9-7 in 38 games (11 starts) between the two AAA teams.

Off The Charts: Donohue was a St. Louis native and graduate of Christian Brothers College High School where one of his teammates was Mike Shannon, future Cardinal infielder and broadcaster. He was also the son of a St. Louis policeman. He was once asked why he didn't follow his father into law enforcement. He replied: "I'd rather pitch than get shot at." Fair enough.

The Card: His cap got an oversized airbrush job on that '60 card. Topps reused the photo in 1961 with a different airbrush. Now it showed Donohue with the Tigers. Still not very well done. 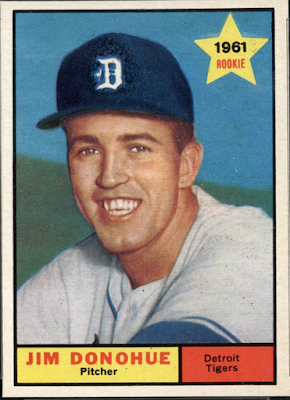