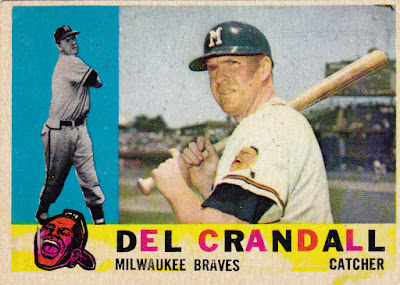 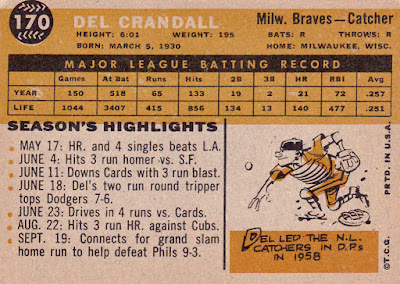 Career: One of the top catchers of his era, Del Crandall kind of gets lost in the shadows behind Roy Campanella and Yogi Berra. But Crandall was an eight-time NL All-Star and won four Gold Gloves after finishing second in the 1949 Rookie of the Year balloting behind Don Newcombe.

Crandall played for 13 seasons with the Braves in Boston and Milwaukee, losing a couple to military service. For an eight-year stretch, from 1953 through 1960, he made seven All-Star squads and led the NL catchers in every defensive category multiple times.

After a falling out with Braves manager Bobby Bragan Crandall was dealt to the Giants for 1964 and finished his career with single seasons in Pittsburgh and Cleveland. He later managed the Milwaukee Brewers and Seattle Mariners for a total of six years.


In 1960: He had a standout season, hitting .294 and driving in a career-best 77 runs while winning his fourth and final Gold Glove. He also had a homer in the first of the season's two All-Star games.

Off The Charts: Crandall is one of a handful of catchers to be behind the plate for consecutive one-hitters by the same pitcher. He backstopped Sam McDowell's April 25 (vs KC) and May 1 (vs Chicago) one-hit shutouts in 1966. As an added point of interest, longtime AL umpire Bill Haller was behind Crandall for both games.

Before signing with the Braves he was being pursued heavily by the Dodgers. According to his SABR bio "Del rejected their $20,000 signing bonus (about 20 times the family’s income in 1946) because of the “bonus baby” stipulation requiring him to remain on the big-league roster for two years and lose invaluable minor-league experience." It also mentions that his father urged him not to sign with the Dodgers, Yankees or Cardinals because their farm systems were already so stocked with talent.

The Card: That's Wrigley in the background and a Jack Davis cartoon. Crandall's batting helmet has a blue brim and I'm thinking the Braves' helmets usually matched their caps and had a red brim. I need to look closer. Not that anyone else cares. LOL
Posted by Commishbob at 7:00 AM