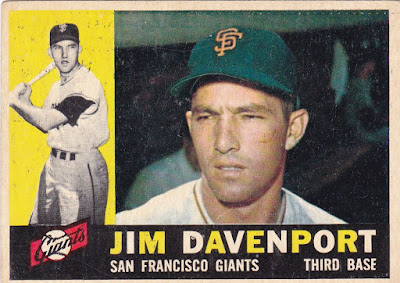 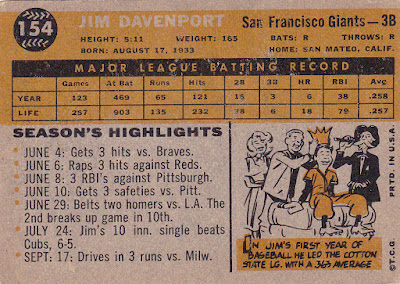 Career:  Jim Davenport played his entire 13-year career with the Giants in San Francisco, debuting in 1958 when he snagged the starting job at third base and kept it until 1970. He was a baseball lifer who spent over five decades with the Giants in many different capacities. He was an All-Star and Gold Glove winner in 1962 which was his best season in the majors. He didn't have a lot of power for a corner infielder, topping out at 14 homers in '62 but he was steady and his defensive skills were invaluable. He led the NL in fielding percentage at third from 1959 thru 1961.

In 1960: He had a typical Davenport season hitting near his career .256 mark and committing only 10 errors in 103 games at third.

Off The Charts: When Davenport passed in 2016 MLB.Com had a nice tribute, one worth reprinting here...


Davenport was enormously popular in the San Francisco Bay area, building his following among fans while spending his entire 13-year Major League playing career with the Giants. He was the club's everyday third baseman as a rookie in 1958, when northern Californians ardently embraced the freshly imported Giants. In '82, fans elected him as the third baseman on San Francisco's 25th-anniversary dream team.
Davenport, who sparkled defensively, was often overlooked in a Giants lineup that included Hall of Fame sluggers Willie Mays, Orlando Cepeda and Willie McCovey. He eventually was displaced by Jim Ray Hart, another power hitter.
Yet in terms of personal integrity, few rivaled Davenport. Racial tension remained prevalent in society and baseball during the late 1950s and early '60s, but Davenport, a native of Siluria, Ala., rose above the fray.
"He was really one of the best teammates, for whites, Latinos and blacks," said former Giants outfielder Felipe Alou, a native of the Dominican Republic. "There was not a trace of racism in him. He was an incredible friend and teammate."
Said McCovey in a 2014 interview with MLB.com: "There was not a prejudiced bone in his body, and that's what I admired about him so much. He was just a regular guy."


The Card: Haven't done much commenting on colors lately but this three-color combo is a favorite of mine. Fun cartoon as well.

From the looks of those 'Season's Highlights, Davenport had a big June.