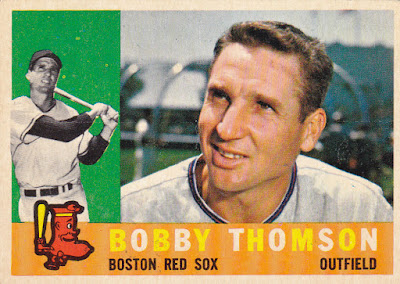 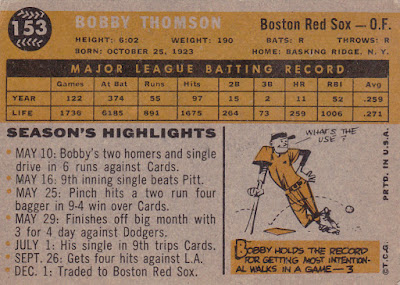 Career: Thomson famously hit the "Shot Heard 'Round The World', the pennant-winning homer off Brooklyn's Ralph Branca in the third game of the 1951 playoff series between the Giants and Dodgers. He's known for that, the most iconic homer in baseball history, but he was a durable, versatile, and dependable player for many years. Playing for the Giants, Braves, and Cubs in the NL and briefly for the Red Sox and Orioles as well, Thomson had 264 homers and a .275 career average. He was a three-time All-Star in a league loaded with All-Star talent in the outfield.

In 1960: This was Thomson's swan song. After being traded to the Red Sox the previous December by the Cubs, he played in 40 games, was hitting .263, and was released on July 1st.  He signed three days later with the Orioles but barely saw the field before being sent on his way at the end of the month. He then went to work as a sales executive in the NY area and spent much of his life re-telling the story of his famous home run.

Off The Charts: Odds and ends from various sources on the web...
On the off chance someone hasn't seen/heard this already, here is a mashup of Russ Hodges' famous call on top of the game video.