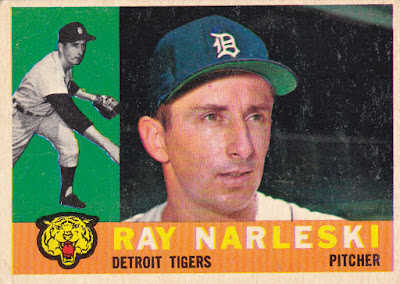 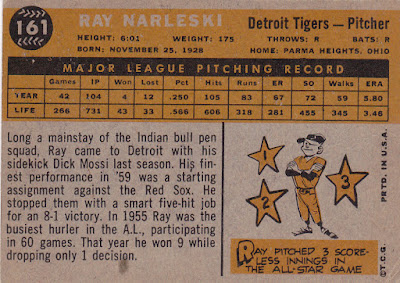 Career: Ray Narleski, a Jersey native, was signed out o high school by Cleveland and experienced a tough first year as a pro in 1948. When a promised AAA-level raise wasn't forthcoming Narleski sat out a season. He returned in 1950 and had a successful four-year tour of the Indians' system.

He made the team in 1954, was put in the bullpen, and helped the Indians win the AL title. Narleski pitched in '54 Series against the Giants and had two effective outings. He allowed only a single (to Willie Mays in Game Three) over four innings.

With the Indians, he became part of a bullpen tandem with Don Mossi and the pair became friends. Narleski led the AL with 19 saves in 1955. He was eased into getting more starts as his career moved along. He had been a starter in the minors and preferred that role. He made two AL All-Star teams. He was traded (along with his pal, Mossi) to the Tigers following the 1958 season. His year in Detroit was hampered by injuries and turned out to be the end of the line for him.

In 1960: Narleski had back surgery early in the year and spent the season on the DL. He returned to the team in 1961 but left baseball rather than accept a potential minor league assignment.

Off The Charts: According to his SABR bio, Narleski played semipro ball in New Jersey and Delaware. He went to work as a mechanic/truck builder. His father, Bill Narleski, had played two seasons for the Red Sox as a platoon/utility infielder.