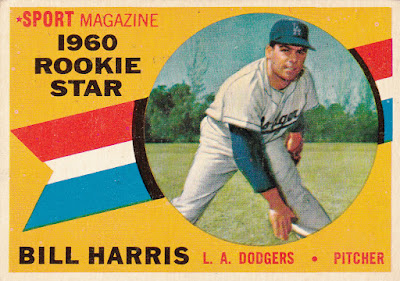 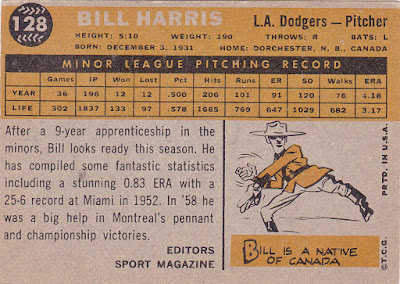 Career: Harris had a long minor league career before he made it onto a Topps card. He had debuted as a pro in 1951. Harris was able to pitch once for the Dodgers in Brooklyn in 1957 and once for them in Los Angeles in 1959. Both appearances came in the last days of the season. He hung around pitching in the minors until 1965 enduring bottom rung, 'B' classification, independent ball at one point.

In 1960: Back in the day some bigger organizations had more than one AAA-level farm club. Harris pitched for both of the Dodgers' teams, Spokane and Montreal. He was a combined 8-6 with an ERA in the mid 3.50s.

Off The Charts: Harris (in his first game) was the starter in the last game caught by Roy Campanella on September 29, 1957. Campy pinch-hit on the 29th and never played again after his accident that following winter.

The Card: He was 29 when the 1960 season opened and was among the oldest of the Rookie Stars in this set. It's his only Topps card.