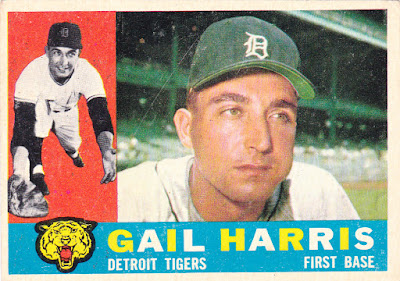 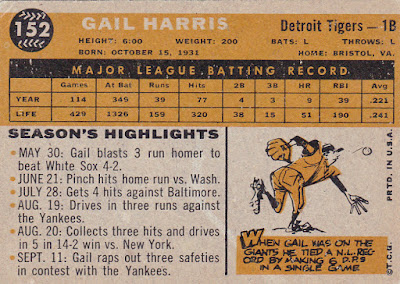 Career: Harris was a Virginia native signed by the New York Giants in 1950. He showed a ton of power in the minors but it took him until June of 1955 to crack the Giants big league roster. He hit 12 homers that year but never showed the power he had had in the minors. He was dealt to the Tigers before the '58 season and led them with 20 homers to go along with 83 RBI and a .273 average. His production in '59 was far below that level.

In 1960: After playing in just a handful of games for the Tigers he was traded to the Dodgers for Sandy Amoros on May 8. He spent the rest of this season (and the next) in the minors and then retired to work in the insurance field.

Off The Charts: His given name is Boyd Gail Harris, Jr. and he was the last New York Giant to homer before the team bailed to the West Coast. He hit it off the Pirates' Eddie O'Brien, normally an infielder. Harris had himself a nice game as this was his second homer to go along with a triple and he drove in seven of the Giants' runs.