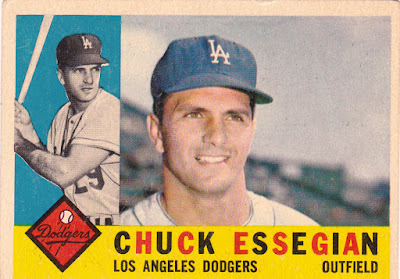 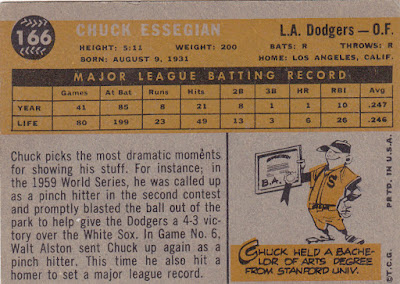 Career: Chuck Essegian was a baseball nomad who played, mostly as a spare outfielder and pinch-hitter, for six clubs over six years. He was known for his power and his career highlight was blasting two pinch homers in the 1959 World Series for the Dodgers. His card's highlight section is a recap o that feat. Interestingly, he had begun '59 with the Cardinals, was sent down, traded to the Dodgers, played in their minor league system, and then was recalled in August. From that point to the end of the season he hit .304 and was a big help in their pennant-winning drive. His best season came with the Indians in 1962 when he played nearly full time and had 21 homers while driving in 50 runs.

At the bottom of this post you'll find the highlights video from the '59 series. It's narrated by Vin Scully. Al Smith's infamous beer shower comes at the 8:00 mark, Essigian's dingers at 8:45 and 31:20. It's worth watching if only to see Big Klu flex those bare arms.

Off The Charts: Lots of neat stuff with this guy!

He was a two-sport star at Stanford playing baseball and football. He became the second guy to play in both the Rose Bowl and World Series. The first was Jackie Robinson.

His degree was in biology, and he considered becoming a doctor or dentist before deciding baseball was where he belonged.

He was also an accomplished violinist and could have had a career in music according to a few bios I read.

After he retired he got a law degree and was a practicing attorney in Southern California until retiring in 1987.

And he spent 1961 as part of four franchises. His contract was purchased by the Orioles from the Dodgers on February 1. The Orioles traded him to KC just after Opening Day. The Athletics sold him to the Indians in May.

He got exactly one at-bat with the Orioles in 1961, but he was pictured on his Topps card with them that year. I posted it below.

He's a member of the Armenian American Sports Hall of Fame.

The Card: Another one of the cards I remember from when it was fresh out of cello packs I picked up at the EJ Korvette store in Hicksville, Long Island. 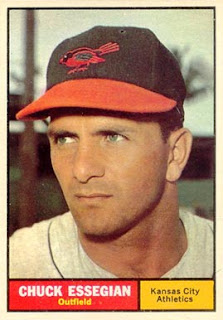