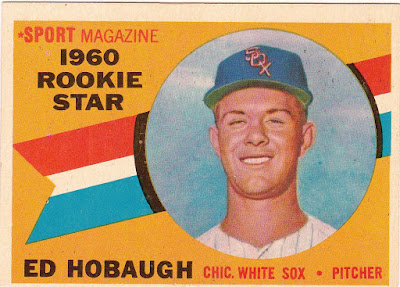 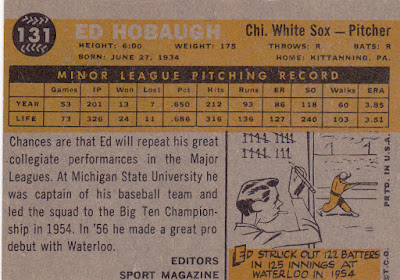 Career: Hobaugh was a hard-throwing Michigan State pitching star who signed with the White Sox in 1956 and pitched a no-hitter for his Class B minor league team three weeks later. He served two years in the Army and then pitched for the Sox at AA for a couple of years. He had some success but never got a shot at their big league roster. He was taken by the Senators in the expansion draft and pitched in parts of three seasons in Washington from 1961 to 1963. Hobaugh hung around the minors for most of the decade after that, mainly in the Pirates chain, and then managed in the low minors. He finished with a 7-9 career record in just over 200 innings for the Nats.

In 1960: Pitching for the Sox' AAA club in San Diego, Hobaugh saw his numbers dip from previous seasons which is likely why he was left available in the expansion draft.

Off The Charts: At Michigan State his teammates included major leaguer Ron Perranoski and professional football legend Earl Morrall on a club that finished third in the CWS in 1956.

After baseball Hobaugh became a physical-education teacher and assistant baseball coach (yeah!) – serving under his eldest son, Bradley, the head coach – in the Armstrong (Pa.) School District.
Posted by Commishbob at 12:00 AM