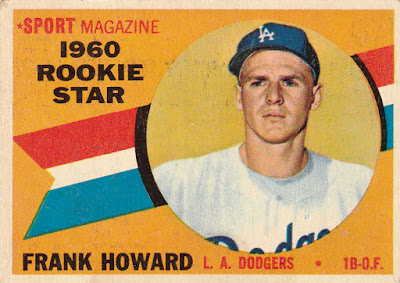 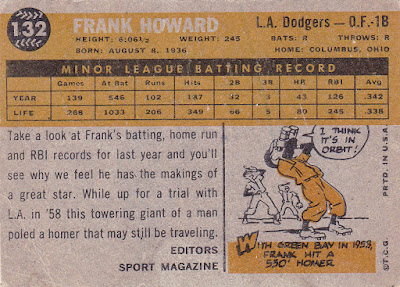 Career: Howard, who had one of the great nicknames (The Capitol Punisher), was known for his size and prodigious homers. His 16-year big league career was divided between the Dodgers and Senators/Rangers, with a brief spin in Detroit at the end. He had a run of 44, 48, and 44-homer seasons from 1968-1970 when offense was at a premium in baseball. He was also able to keep a .273 career average and hit exactly .296 on three occasions. His homer off Whitey Ford in Game Four of the 1963 World Series helped the Dodgers wrap up a sweep of the Yankees.

Ted Williams took over as manager of the Senators in 1969. He persuaded Howard to lay off pitches that were not in his wheelhouse. Howard responded with a much better ration of walks to strikeouts and upped his batting average while continuing to hit with power.  Howard later said of Williams: “I was ready to hit if it was my pitch, but if it was something other than I was looking for, I took it. I was laying off some bad pitches, getting more counts in my favor, and all because of Ted Williams. He’s one in a million! A marvelous, marvelous, man!”

Off The Charts: Howard played for seven seasons with Washington, and he led the team in homers and RBIs in all seven of them. In addition to the interest he drew for his baseball skills Howard was drafted by the Philadelphia Warriors of the NBA following an All-American college hoops career at Ohio State.