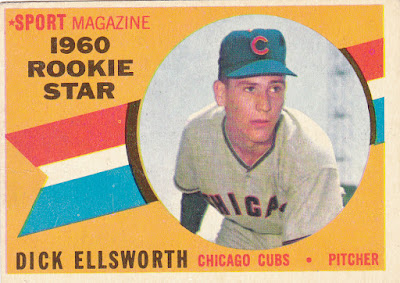 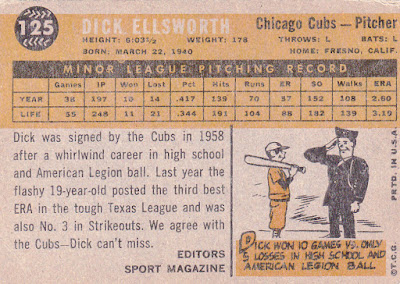 Career: Ellsworth was a top half of the rotation pitcher for the Cubs in the mid-60s. He signed with the Cubs just days after finishing high school in June 1958 and made his big league debut the 22nd of that month when he was handed a start in Crosley Field against the Reds. He took his lumps that day but when he returned to the majors in 1960 he settled in as a reliable starter. He best season came in 1963 when he went 22-10 games for a club that finished barely over .500 and in 7th place. He became the Cubs winningest pitcher of the decade before being traded to the Phils and then on to Boston. The California native had one final standout year there with 16 wins. He finished his career with a couple of less-than-stellar turns in Cleveland and Milwaukee.

In 1960: He was called up to face the Pirates on May 4th and pitched a complete game in a 5-1 Cub win. He finished the year pitching in 31 games (27 starts) and, although he only won seven games, he showed he belonged in the majors with really nice overall numbers.

Off The Charts: Ellsworth's SABR bio makes a point of how his lack of support led to a poorer record than many of his contemporaries with lesser skills who pitched for better clubs. That may be behind some comments he's made about the organization including in this interview where he is quoted saying this:


“The Cubs had talent, players like Ernie Banks, Ron Santo, Billy Williams, Don Kessinger, Glenn Beckert and Randy Hundley. I had already been there seven years in 1966, the year I lost 22, when I realized that all the raw talent never got help from the organization in terms of making them better ballplayers. The guys who did go on to be great players – Banks, Santo and Williams – did it by themselves. The Cubs were just not an organization that contributed to anyone’s development. I think history will prove that correct. We just didn’t play good baseball.”


The Card: This is one of the cards that I remember very well from my early collecting days. As I have noted, this Rookie Star subset made an impression on me back then, some more than others. Bill Short's card was another I remember vividly.
Posted by Commishbob at 6:30 AM