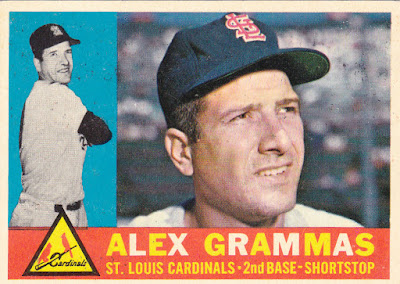 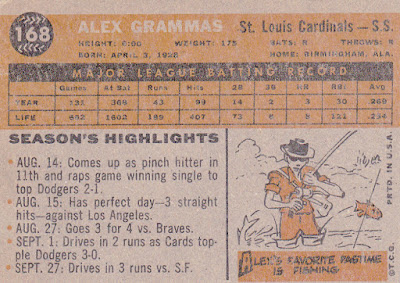 Career: An Alabama native and WWII vet, Grammas spent most of his life in baseball. Originally signed by the White Sox, he played 10 seasons with a variety of NL clubs, mostly in St. Louis. Of his ten seasons he spent three as a regular but was most often filling a utility infielder's role. His versatility and defensive skills kept him in the majors more than his erratic bat. After the 1963 season he stayed in the game as a coach and manager. He took over the Pirates for a few games at the end of the 1969 season and then managed the Brewers, without much success, in '76/'77.

In 1960: This was his second tour with the Cardinals and, after holding down the starting shortstop job in 1959, he gave way to Daryl Spencer. It was his last year to play in as many as a hundred games. He played at short, second, and third as a the spare infielder and hit .245, but he did have a career-high four homers.

Off The Charts: From his SABR bio...After retiring, he was a third-base coach for a quarter-century, mainly for teams managed by Sparky Anderson. Forever proud of his ancestry, Grammas in 1976 became the first Greek-American ever to manage a major-league team for a full season.

His father ran the Magic City Candy Co., and during his early baseball career he would go back to Birmingham and pack candy during the off season. Alex Grammas died last September at the age of 93.
Posted by Commishbob at 7:00 AM