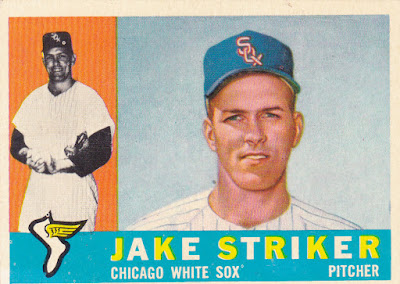 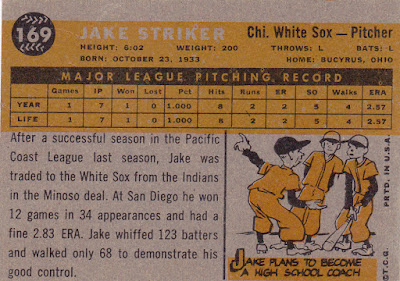 Career: Not many pitchers could boast of a perfect record but Wilber 'Jake' Striker won his only big-league decision when he beat the Athletics in late 1959. He was with the Indians and had come thru their system after being signed out of Heidelberg College in 1952. Not long after that September win, he was sent to the White Sox in a deal that was headlined by Minnie Minoso going to the Sox and Norm Cash heading to Cleveland. Striker totaled just over 10 innings in the majors and left baseball after a few minor league stops through the 1962 season.

In 1960: He made the Sox staff in 1960 and pitched in back-to-back games against the Tigers in April with one good and one not-so-good result. He headed back to the Sox AA level club and never returned to the majors.

Off The Charts: 'Striker' is a perfect name for a pitcher. He worked for the Timken Company for thirty years after baseball. I found no evidence that he went on to coach high school baseball as the card's cartoon sez was his goal. He passed away in 2013 having survived his wife and oldest child. This is his only Topps card but I came across one newspaper photo of his and his young family. 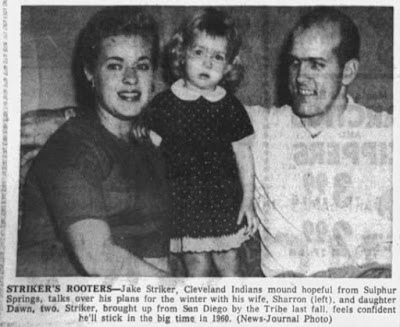 The Card: This is probably the fourth copy of this card to pass through the binder. The first one, part of my original lot buy, was brutal. I bought one or two that had flaws that I hadn't noticed in the eBay pics. This one is miscut but it'll do.