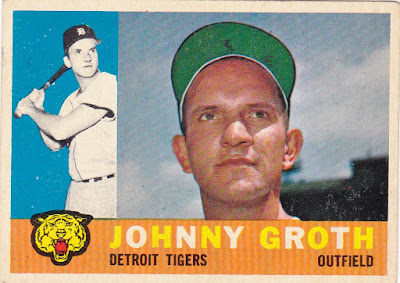 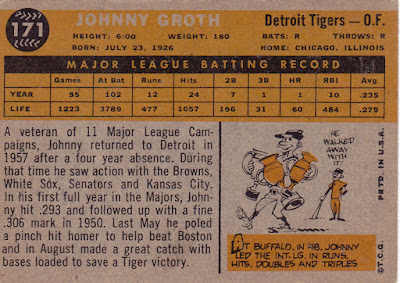 Career: After drawing attention playing ball on Bob Feller's team in 1945 Groth signed with the Tigers for a nice bonus. He got some looks from the Tigers with three call-ups before he claimed the starting center fielders job in 1949. He had a terrific opening month before cooling off and eventually having his rookie year cut short with an injury. He finished fourth in the RoY balloting.

In 1960: This was Groth's final spin around the majors. He was serving as a pinch-hitter and doing well in his limited chances (.397 in less than 20 at-bats) when the Tigers optioned him back to AAA with a promise to give him a manager's job in their system the following year.  They made good on their promise and Groth spent a couple of seasons in their lower rungs as a skipper.

Off The Charts: Groth is one of the few players I've come across with more than one entry on the SABR site. This one is the standard (very detailed as always) bio page. The other one is a nice sidebar that looks at his debut month the hype that grew as he got off to a hot start. Both make for entertaining reading.