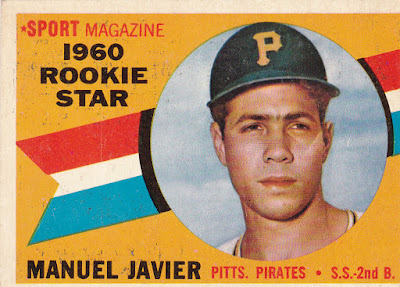 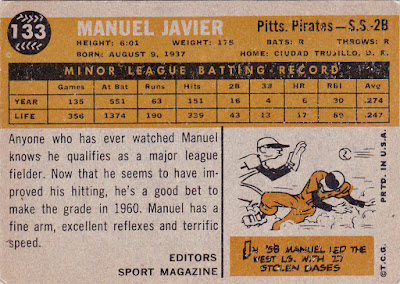 Career: Manuel (better known as Julian) Javier, a native of the Dominican Republic, never played an inning for Pittsburgh despite being depicted as a Pirate on his rookie card. He was traded to the Cardinals after moving up the Bucs' system since 1956. He had been deemed expendable because the Pirates had Bill Mazeroski ahead of him. He went on to a 13-year career that included a couple of All-Star squads and two World Series rings. His glovework and speed made him a valuable member of the Cardinals through the 1960s.

In 1960: He began the year as he had the previous four, playing for a Pirates' farm club. But a month into the season he was dealt to the Cards, stepped into the starting second baseman's job, and didn't let go of it until 1971. Playing in 119 games he led the team in stolen bases and was fifth in hits and runs scored.

Off The Charts: The stadium in his hometown of San Francisco de Macoris is named in his honor.

The Card: Javier's birth date on the back of this card is listed as August 9, 1937. Every source I checked gives the year as 1936. It wasn't uncommon for players coming from Latin America to 'fudge' their age a bit. His 1961 card also has the '37 date but after that Topps corrected it to 1936. This is also the only card (of any kind as far as I can find) that has him depicted A) as a Pirate; B) without glasses; and C) as 'Manuel', at least on the front of the card. Topps' 1970 card gives his name as Manuel Julian Javier on the back.

Posted by Commishbob at 1:18 PM