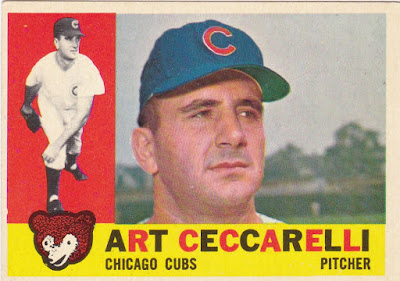 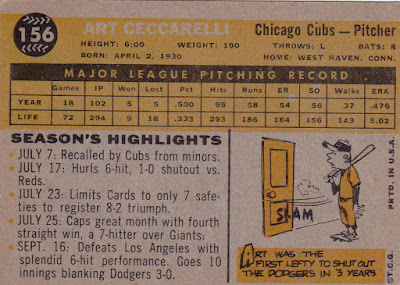 Career: Ceccarelli had much more success in a long minor league career than he had in the bigs. He was originally signed in the late 40s by the Brooklyn Dodgers. He spent four seasons in their lower minors and a couple of years in the military during the Korean War.  The Yankees obtained him from the Dodgers hat began a journey that took him through the systems of the Yanks, Athletics, Orioles, Cubs, Yanks (again), and Indians. Along the way, he pitched in 79 big league games, won 5, and had a career ERA above 5.

In 1960: He began the year on the Cubs' staff but in seven appearances wasn't very successful and was traded to the Yankees in May. He was with the Yanks' AA club the rest of the way and never did return to the majors.

Off The Charts: Here is Ceccarelli's view of pitching in Wrigley Field: "It wears pitchers down. The winds are unbelievable. Willie Kirkland once hit a home run off me that Ernie Banks called for at shortstop."

The Card: Red/Yellow/Black/Red is a great combo on these cards. And cards with pics taken at Wrigley get bonus points.
Posted by Commishbob at 7:30 AM