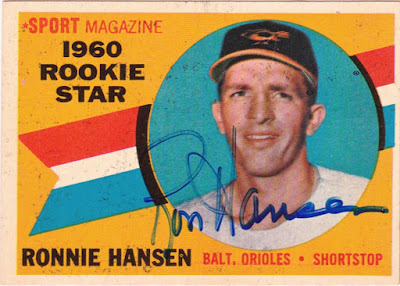 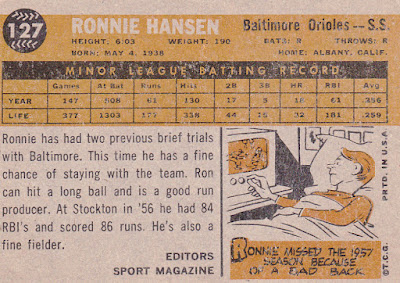 Career: Born in Nebraska and raised in California, Hansen was a multi-sport high school star who turned down scholarship offers to sign with the Orioles in 1956. After a promising pro debut year in 1956 in the Orioles' chain, he sat out the 1957 season due to required back surgery. His back gave him problems throughout his career.  He was a tall (6'3")  shortstop with a great glove and range. Hansen wasn't a great hitter over the course of his career but he was above average at a position that usually didn't require a big bat to make a lineup back then. He played 15 seasons in the AL for the Orioles, White Sox, Senators, Yankees, and (briefly) the Royals.

He ranked #1 in various defensive categories during the early 60s.

In 1960: He had a heck of a rookie season in 1960. Taking control of the Orioles' shortstop job he hit 22 homers, drove in 86 runs, hit .255, and garnered enough MVP votes to rank fifth in the AL. He started both of the All-Star games and got three hits in six trips. He topped it off by being awarded the AL Rookie of the Year award. As an Orioles fan, I find it cool that all the first-place votes went to the flock of 'Baby Birds' as they were known. Hansen got 22, Chuck Estrada and Jim Gentile received the others (one each).

Off The Charts: From Wikipedia...


On July 30, while playing for the Senators in a game against the Cleveland Indians, Hansen turned the eighth unassisted triple play in major league history and the first in 41 years. In the bottom of the first inning, Hansen caught a line drive off the bat of Joe Azcue, touched second base to put out Dave Nelson, then tagged Russ Snyder coming from first base. In the at-bats following the triple play, Hansen struck out six consecutive times – four times on July 30, and twice more on July 31.


The Card:  This signed copy came from a stash of autographed cards I picked up years ago from Larry Dhuly, a card dealer I've known since we worked together at the Houston Post in the early 70s.  He closed his storefront some years ago but still promotes shows across Texas and sets up at TriStar shows here.
Posted by Commishbob at 7:00 AM